21,6 g
4 reviews
Skip to the end of the images gallery 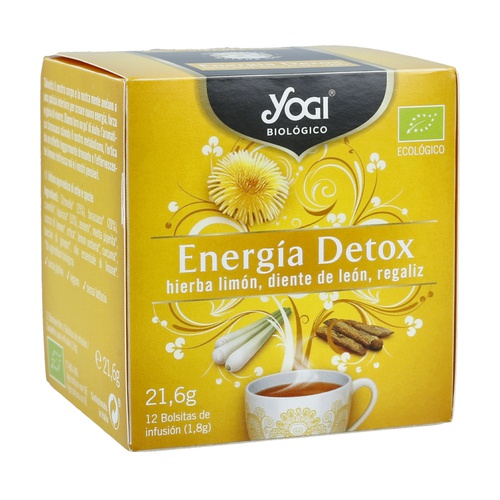 Skip to the beginning of the images gallery
SKU: LP-0053992
BFA0UEI8EG3
Store review (4.70 / 5) EXCELLENT
YogiTea Energy Detox, is an infusion whose components the spiced dandelion stimulates the metabolism, the nettle has a smooth drainage effect and the intense lemon serves to refresh us and our thoughts.
View description

YogiTea Energy Detox, is an infusion whose components the spiced dandelion stimulates the metabolism, the nettle has a smooth drainage effect and the intense lemon serves to refresh us and our thoughts.

Lemongrass contains essential oils and has a strong, fresh lemon flavor. To this day it is not clear where the plant of the grass family widely used in Asian cuisine originally came from.

Dandelion belongs to the best known and distributed wild plants. It blooms almost everywhere where its bright yellow hermaphrodite flowers seek heaven. Its leaves have a very aromatic flavor: slightly bitter and slightly sour, they are ideal for salads, smoothies and, of course, for tasty infusions.

Licorice, an essential component of licorice sweets, has been known since ancient times. It has a sweetening power 50 times stronger than sugar and has a mild sweet and sour-bitter taste.

In Christmas pasta, in curries or as lemonade: Bulbous ginger is one of the most popular species in the world. For millennia they have been cultivated in the tropical heat of East Asia and it gives many infusions of Yogi Tea its spicy, aromatic and tasty flavor.

Bees love fruits rich in nectar, people appreciate the tasty, fresh lemon flavor of its leaves. In the Middle Ages, lemon balm was highly prized, as it had to be cultivated in all the gardens of convents and monasteries.

It is recommended to pour 250 ml of freshly boiled water over the tea bag. Allow to steep for 5 minutes or more for a stronger flavor.