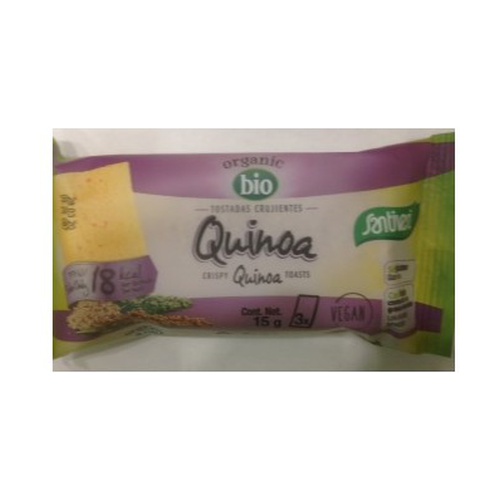 Skip to the beginning of the images gallery
SKU: LP-0053870
B03XRASMJ0V
Store review (4.70 / 5) EXCELLENT
Due to its lightness, high volume and low caloric value, Quinoa de Santiveri Light Toasts are very useful in weight control diets, as a substitute for bread or omelette.
View description
£0.98
In stock
We cant confirm the shipping delivery date. Contact us for more information.
Store review (4.70 / 5) EXCELLENT

Due to its lightness, high volume and low caloric value, Quinoa de Santiveri Light Toasts are very useful in weight control diets, as a substitute for bread or omelette.

They contribute to giving a feeling of satiety so they can be eaten as a snack to curb the appetite. The fundamental objective of organic farming is obtaining the highest quality food, respecting the environment and preserving the fertility of the land through the optimal use of resources and without the use of synthetic chemicals. Toasts made with puffed brown rice and quinoa. Quinoa was the staple food of the Incas for thousands of years until the arrival of the conquerors, who replaced its cultivation with corn and potatoes. Today it is cultivated again in the Andes, in England and some of its varieties, in various countries. Quinoa (Chenopodium quinoa Willd) is not properly a cereal although it forms grains or seeds, it is an annual broad-leaved plant belonging to the family of chenopodiaceae, which also includes beets, spinach and chard. In addition to the seeds, the cooked leaves are also used as fresh vegetables.

Due to their lightness, high volume and low caloric value, they are very useful in weight control diets, as a substitute for bread or omelette. They also contribute to giving a feeling of satiety so they can be eaten as a snack to curb the appetite. Quinoa brown rice pancakes are gluten-free and therefore tolerated by gluten-intolerant patients. For the entire family. They can replace bread and omelets in meals, snacks, and canapes. Ideal to accompany breakfast, lunch or dinner. They can be consumed alone or with sweets (jams, honey) or salty (pâtés, margarines, butter) etc. If the product softens, heat it in the microwave for a few seconds as this will restore its crisp texture.

Not suitable for diabetics.