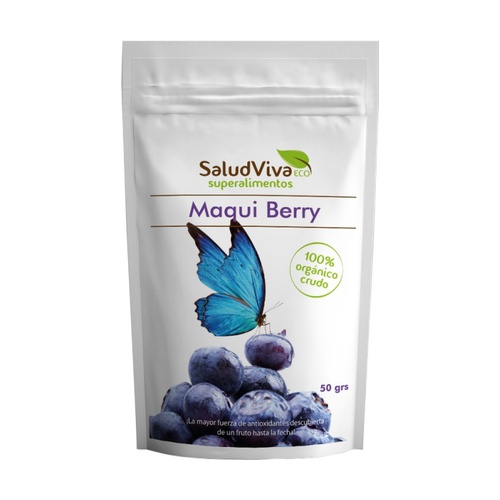 Skip to the beginning of the images gallery
SKU: LP-0004586
BD4QEESMGR6
Store review (4.70 / 5) EXCELLENT
Maqui Berry de 50gr de Salud viva is a superfood made from maqui, a plant frequently used by the Mapuche culture. It is a species native to the Patagonia of Chile and Argentina. Maqui has taken the throne as the fruit with the highest antioxidant content in the world. Without magnesium stearate, without silicon dioxide ... Only the ingredients indicated.
View description

Maqui Berry de 50gr de Salud viva is a superfood made from maqui, a plant frequently used by the Mapuche culture. It is a species native to the Patagonia of Chile and Argentina. Maqui has taken the throne as the fruit with the highest antioxidant content in the world.

Without magnesium stearate, without silicon dioxide ... Only the ingredients indicated.

Before this discovery, the fruit with the highest antioxidant content was the Acai fruit. Compared to the usual fruits and berries, the dark purple Maqui berry is packed with anthocyanins, a powerful antioxidant, as reflected in its high ORAC (Radical Oxygen Absorbance Capacity) value.
An independent laboratory report from the Brunswick (MA) laboratories indicates that the ORAC value for Maqui berries is 27,600, a value that far exceeds that of many fruits and berries and even that of other super foods such as berries. from AÇAÍ (16,700), Granada (10,500) and blueberries (6,500). A large handful of blueberries would give you an ORAC score of around 6,000.
Until recently, AÇAÍ berry and Goji berries were thought to be the fruits with the highest level of antioxidant. That was until the recent appearance of the Patagonian Maqui Berry.
If a food has a high ORAC rating, it means that the food is rich in antioxidants. The strength of the antioxidant is its ability to remove oxygen free radicals. With the ORAC score, a higher score means that food is better to help us fight disease.
Foods with a high ORAC score may be able to protect cells and their components from oxidative damage. Oxygen radicals are chemicals that occur naturally within the body through the oxidation process. Daily functions such as digestion and physical activity produce oxygen radicals. Daily exposure to polluted air, stale food, solar radiation, and electrical appliances can also contribute.
The power of antioxidants may be a relatively new phenomenon, but it seems we have discovered the most potent source of their available health benefits on the planet.
The Maqui berry helps cleanse the skin of impurities, speeds up digestion, strengthens your bones and joints, and much more.
Taking a daily dose of maqui berry powder is said to have an incredible effect on health. It is so strong that it helps the health of your heart, facilitates clarity of thought and even reduces the risk of contracting degenerative diseases. The fruit of the Maqui is much stronger than that of AÇAÍ, Pomegranate and Blueberry, because it has more benefits and antioxidants than all of them combined.

It is recommended to mix with fruit juices or smoothies.