60 capsules
Skip to the end of the images gallery 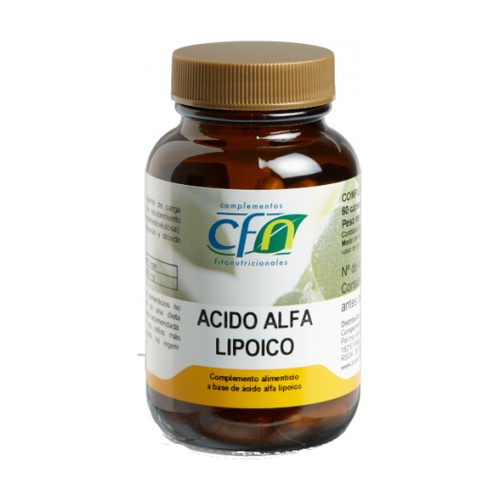 CFN Alpha Lipoic Acid is a nutritional supplement with protective action on liver function and with important antioxidant properties.

Alpha Lipoic Acid (lipoic acid, AAL) is a natural substance produced in small amounts by our body, which plays an important role in the metabolism of sugars and provides energy to cells. It has a protective action on liver function and is important in the treatment of diabetic neuropathy.

In the 1980s, Alpha Lipoic was discovered as a powerful antioxidant and there are those who maintain, such as Dr. Lester Packer, that it is the ideal antioxidant. It is also known as “the master antioxidant”. This is because it restores the ability of other antioxidants to scavenge free radicals, increasing their effectiveness. This is particularly the case with vitamin E that is recycled in the body every time it neutralizes a free radical, preventing it from damaging cell membranes. It also restores the action of vitamin C, glutathione and Coenzyme Q10.

The molecular structure of AAL (Alpha Lipoic Acid) makes it a unique and versatile nutrient. Its molecular weight (206) and its sulfur atoms are largely responsible for its functional capacity:

As a coenzyme in the energy process
As a powerful antioxidant
As a burner and remover of excess iron, copper and toxic heavy metals (cadmium, lead and mercury).

Oxide or free radicals are toxic metabolic waste substances that harm the body. These are not directly discarded by the body because they are combined with oxygen, an essential element for our body.

This antioxidant is also known to improve the sense of smell.

Alpha Lipoic Acid Benefits:
Important studies have shown that Alpha Lipoic Acid in the diet of type II diabetics increased insulin levels by 30%, notably increasing the use of glucose in the blood.
In patients with cataracts, visual acuity is notably improved, since it stimulates the production of the antioxidant glutathione, which in turn protects our eyes so that the cataract does not develop.
Diabetic Neuropathy: Alpha Lipoic Acid has been scientifically shown to reduce diabetic neuropathy symptoms, mainly pain, numbness in the lower extremities and burning. The recommended dose for patients with this disease is 600 mg 3 times a day, thus reducing symptoms by 50%.
Glaucoma: A disease that causes damage to the optic nerve, which can lead to blindness. This disease mainly affects large numbers of Americans. Patients with stages I and II of open angle glaucoma were administered 75 mg of Alpha Lipoic Acid for two months, these results were very satisfactory, thus improving visual function in these people.
Alpha Lipoic Acid enters the brain and directly protects the cells where it is most needed. Once in the brain, Lipoic Acid increases glutathione levels, protecting it from free radicals. Research has shown that low levels of glutathione in the brain are associated with brain disorders such as Parkinson's, Alzheimer's and Dementia.
It helps improve heart health by increasing the efficiency of the heart muscle.
Protects the capillary arteries and veins.
Alpha Lipoic Acid is considered the best antioxidant that protects the liver, it is also very important for diseases like hepatitis C. In Europe it is used for drug poisoning, alcoholic hepatitis, poisoning caused by poison and patients subjected to radiation.