120 softgels
Skip to the end of the images gallery 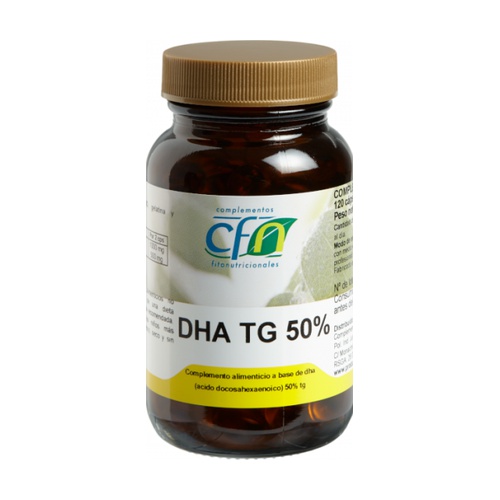 Skip to the beginning of the images gallery
SKU: LP-0002256
BQYYC9CCP3H
Store review (4.70 / 5) EXCELLENT
DHA TG 50% CFN is a nutritional supplement based on omega 3 fatty acids with high bioavailability by the body.
View description

DHA TG 50% CFN is a nutritional supplement based on omega 3 fatty acids with high bioavailability by the body.

Properties and benefits of DHA TG 50%

Most of the Ω-3 fatty acids that we find on the market are ethyl esters, an artificial form of DHA that is difficult to absorb (they remain in the blood, but their use by the cell is poor; while the natural form of triglycerides is much more bioavailable without producing any side effect.

DHA is an essential component of cell walls, especially the brain, eyes, and central nervous system; having been shown that its intake as a dietary supplement prevents many health problems, especially degenerative ones.

Docosahexaenoic acid (DHA) is a long-chain omega 3 fatty acid derived from alpha-linolenic acid. DHA, along with arachidonic acid, is the polyunsaturated fatty acid found in highest concentration in nervous tissue. DHA has been proposed to play an important role in the formation and function of the nervous system, particularly in the brain.

Its mechanism of action has not yet been fully elucidated, but it is proposed that it would act at the level of cell membranes regulating its metabolic functions and also at the level of the expression of genes related to brain function. DHA brain content has been correlated with the learning ability and intelligence level of newborns and infants.

Numerous tests in experimental animals and in children have demonstrated the need for fatty acid during brain development. DHA, formed from its precursor, from the diet, or from tissue reserves, is supplied by the mother to the fetus during the gestational period and through milk during lactation.

The need to supplement the mother with DHA during the gestational period, and even before it, has been suggested to ensure the adequate supply of fatty acid for the normal development of the fetal brain. Supplementation can be done through oils with high DHA content, from phospholipids, in the form of ethyl esters of DHA, or as monoglycerides that contain DHA as the only fatty acid.