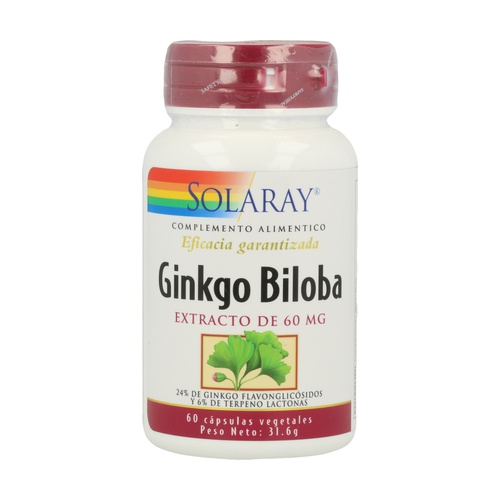 Skip to the beginning of the images gallery
SKU: LP-0018658
BX0YX5DGV2T
Store review (4.70 / 5) EXCELLENT
Solaray Ginkgo biloba is a nutritional supplement of Ginkgo extract that contains all the important compounds including ginkgolides and bilobalides. includes antioxidant and venotonic properties
View description

Solaray Ginkgo biloba is a nutritional supplement of Ginkgo extract that contains all the important compounds including ginkgolides and bilobalides. includes antioxidant and venotonic properties

Solaray's Ginkgo biloba acts as a specific brain vasodilator, which together with its antioxidant properties make it very useful as a protector of the central nervous system, especially in elderly people, it can alleviate the neurological consequences of atherosclerosis and is effective in treatment of dizziness, tinnitus, dizziness and tension headaches. It decreases capillary permeability and increases venous tone, being indicated in the treatment of minor symptoms, such as heaviness and swelling of the legs, the appearance of frequent bruising or painful adaptation to changes in temperature, and of pathologies such as varicose veins, phlebitis, insufficiency venous and hemorrhoids.

It is recommended to take in the morning and in the afternoon outside meals.

They have not been described.